According to ILGA research for 2020 so called poland became the most homophobic country in EU. However it is not a suprise for any LGBTQ+ person who live there. The hostile homophobic and transphobic politics were visible on rise since present government took power in 2015 and reached its peak point in recent presidential election. The tone of elections was dominated by ostensibly ultrahomophobic campaign of present far-right president who won next term of presidency this country. People could « learn » from his campaign that they are not people but just an ideology and that they destroy polish families and hundreds of tons of other bullshit. That was the clear sign for most fascist and conservative parts of society that hostile and discriminatory attitude towards LGBTQ+ people have full support from the highest autorites in the country.

In the meantime some departamental authorities started to establish so called « antilgbt zones » in their areas- kind of law restrictions that are in theory based on protecting so called polish families, but in reality they are creating zones where lgbtq communities have to live under really heavy oppression one from the government and one from the society from the other side. « AntiLGBTQ zones » appeared on 1/3 territory of the country. Pararell to this events in some cities appeared cars armored with huge banners and megaphones. You can hear and read from them that lgbtq is actually pedophilia or that people who are fighting for abortion want to « sexualize » polish children (sic!).

27th of June 2020 in Warsaw one of the cars was smashed. That was not first time when somebody expressed ones dissagrement against homophobic propaganda spread by those cars. Especially known from protesting those cars and organizations standing behind them (« Foundation Pro ») is young anarcha-queer collective named « Stop Bzdurom » (Stop Bullshit). Following their self-discription they:  » (…) work for LGBTQ+ – smart, educated, brave, and most of all- with a causative power. We differ from the rest of LGBTQ+ groups in Poland on account of our shameless mugs, unapologetic nature, and methods which neither TVP.info ( “News” station affiliated with the government), nor the rest of right-wing asshats would dare to dream about. Everything we’ve done here results from the anger in response to the cruel, harmful, iIl-conceived actions of the fanatics. »
So it wasn’t so supprise when 14th of July in early morning hours police raid a flat where one person from SP collective staing at. Police brutally dragged Margot out of the flat in her pyjamas (without shoes, socks or a sweatshirt), and took her to an unmarked car, threatening her with abuse and death, calling her a f*ggot and a loser. The activist was held up all night, and released the next day by the court, without arrest. Now she needs funds for herself and other people at risk, as well as for further actions of her collective.

For now Margot and her collective need about 4,000 euros for lawyers, and another 4,000 for the queer campaign they want to start next month. All raising funds above this amount will be donated to the Polish Anarchist Black Cross and to anti-repressive activities. To support some people decide to hold video-conferance with people from Stop Bzdurom and solidarity dinner on old Gare of Lumeville to rise founds.This will happen at 11th August

There are also possible individual donations. Informations about how to donate and more about Stop Bzdurom you can find on the website under the link here:
stopbzdurom.pl/help-us

We would like to also encurange you to express your solidarity in any way you feel would be appropriate??

Below is the plan of the event, on august 11th on the old Luméville trainstation :

19.00 – dinner
20.00 – video conferance
After conferance – Projection « Tu nie chodzi o ludzi » ( It isn’t about people). It is a patchwork of filmed assemblies of polish departamental autorieties while debating « AntiLGBTQ zones » laws. Good for education but horrible as cinema. 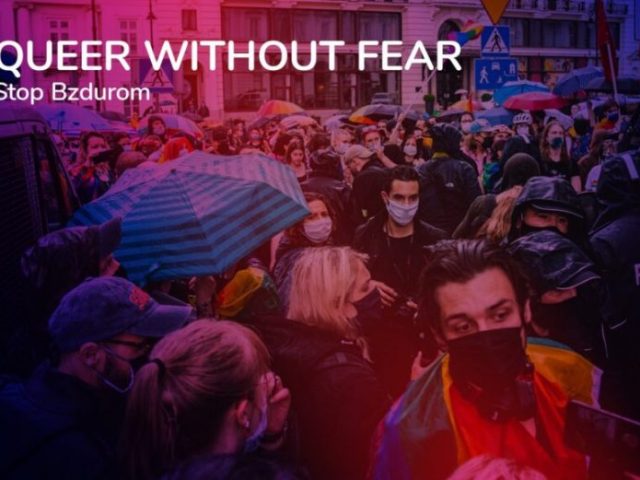 Videoconference with People from Stop Bzdurom (...

According to ILGA research for 2020 so called poland became the most homophobic country in EU. However it is not a suprise for any LGBTQ+ person who live there. The hostile homophobic and transphob...   Lire la suite