What is happening in Bure ?

The project of building a huge nuclear dump called CIGEO is ongoing since 1994, due to a french law from 1991 about the management of nuclear waste. A second law in 2006 decided to focus on Bure, in the department of the Meusen which has a clay based underground. This law was passed under the disguise of building “laboratory” for geological research. A third law in 2016 starts the beginning of CIGEO, under a so-called “pilot phase” which has nothing to do with research. This is the first industrial phase of the project (costing approximately 25% of the estimated total!).

The public declaration of interests (DUP) was filed in 2020. Its goal is to approve the interest of the project, especially to justify expropriations of necessary lands and new preparatory works. In the years to come, ANDRA (national agency for managing nuclear waste), the engineer of CIGEO, is supposed to ask for the authorization to create CIGEO and then, if approved, construction should start. However, some preparation works have been happening since 2015, and face ongoing protests. 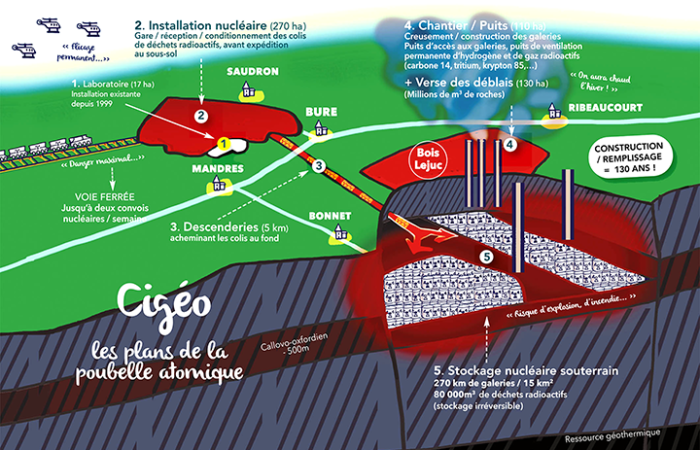 Cigéo : plan of the nuclear trash

Cigéo would be spread over five villages in Meuse and Haute-Marne departments : Bure, Saudron, Ribeaucourt, Bonnet and Mandres. It would be 270 ha if surface nuclear installations and 300 km of underground tunnels, which would provide storage for the most radioactive products of the nuclear industry. All that for at least 40 billion euros.

A future no man’s land? Who would want to live next to that?

For the moment it is just a project. At this point in time there is no nuclear waste in Bure, and the first arrivals are not due before 2025.

However, ANDRA continues to buy land (already 3000 ha in the Meuse and Haute-Marne departments), and to build infrastructure (railway, roads, electricity lines, etc) and their propaganda keeps spreading…

In order to make CIGEO and opposition to the project understandable by as many people as possinle, popularization sheets were created in French. You can download them below :

The house of resistance

In 2004, some people against the nuclear state from France and Germany created an association called BZL (Bure Zone Libre / Bure Free Area). The year after, they bought an old farmhouse to renovate in the Meuse region in the heart of the small village of Bure, in the form of a non-trading property company (SCI) with the Sortir Du Nucléaire network. This ruined farm will become the « House of resistance to nuclear waste » (« Maison de résistance à la poubelle nucléaire »).

At this point in time, this house is a living place open to everybody throughout the year. It has a meeting/concert space, insulated space for many people to sleep, a kitchen, a workshop, a computer room and a garden. It is a place to :

The house is always open.

You can send an email to burezonelibre[at]riseup.net or call (+33) 3 29 45 41 77 : if nobody answers the phone, please try to call back because the messages are not checked. (This number is wiretapped by police, we don’t like to say too many names on the phone.)

The closest shop is 10 km away, the nearest train station (Joinville) and supermarket are 20 km away.

The food purchases are made with the free participation of everyone. You can also bring food to share! (please prefer vegan food)

The good functioning and the maintenance of the place are managed by all, regulars as well as newcomers (don’t hesitate to ask what to do and how to participate, and to propose your initiatives!)

The house welcomes people with different sensibilities, opinions and practices. These encounters are very enriching, and require kindness and openness!

The association Bure Zone Libre takes care of the administrative management and a long term follow-up of the house of resistance. It is autonomous and independent. It relies only on the donations from its members and sympathizers as well as from friendly associations and partners.

Other people live around Bure, whether in collective places or not. A collective house, l’Affranchie, exists since 2018 in Mandres-en-Barrois (2 km from Bure). 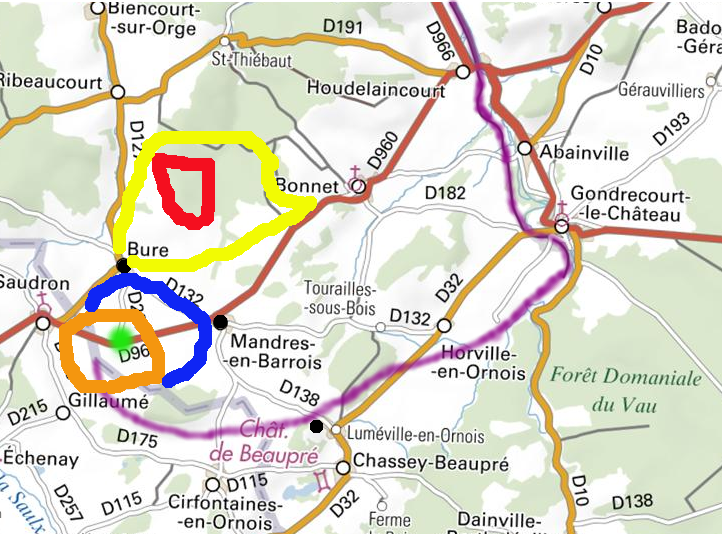 Green : ANDRA lab
Purple : project of renovating 40km of old railway to bring the nuclear waste
Blue : future surface nuclear installations
Orange : area with the installation to carry the waste underground
Yellow : ZIRA area under which they plan to build the underground tunnels
Red : Bois Lejuc, where they plan to put the ventilation pipes. This forest was occupied until february 2018.
Black : Some of the collective places of resistance.