ANDRA get out – Long live handiwork!

A lot has happened around the days of action against CIGEO in the vicinity of the Rayonnantes camp at Luméville station in August 2021. A brief review of the events and a call from some bandits to intensify our resistance. 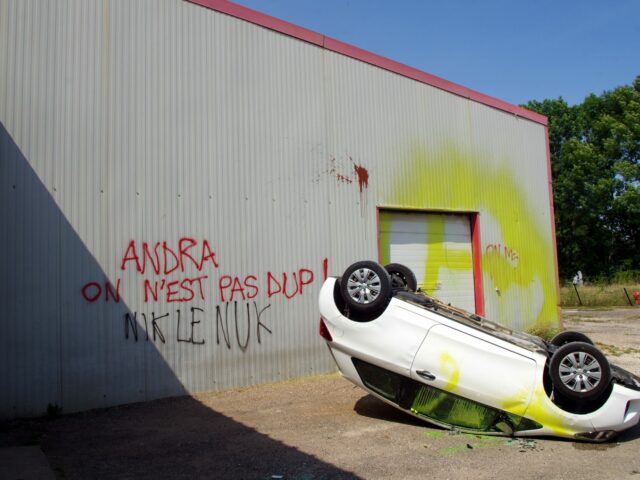 Already before the Rayonnantes camp, there had been interventions of the B.O.R.I.S. group.
Within the framework of a coordinated action, attacks in Bar-le-Duc and in Nancy with paint and smashed windows targeted the SAFER. The insurance company Groupama, which had filed a civil suit with the commune of Bure during the 1-2-3 trials, also suffered material damage. On the railroad track to be renovated between Ligny and Gondrecourt, activists sabotaged parts of the track with jacks.

Grafittis and collages before the camp

In the days preceding the beginning of the action camp, tags against CIGEO and about the DUP [1] multiplied, for example in Saudron and Mandres-en-Barrois. In many neighboring villages, collages and posters were made to draw attention to the demonstration of 21.08. in Horville, the DUP and the Rayonnantes camp. 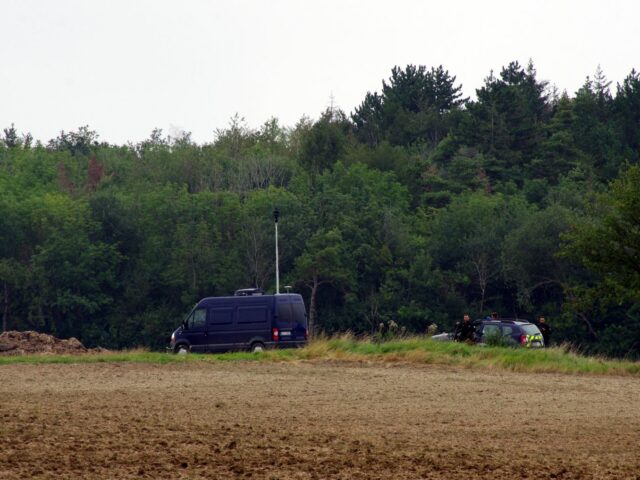 A statement from « enlightened joggers » against « 5G and nuclear power » was published to justify the destruction of a 5G tower near Nancy. Which was burned during the night of August 19.

On Thursday, about a hundred demonstrators left the Luméville train station camp to march towards the Haute-Marne to the sounds of batucada and slogans against the land expropriations threatening the region. The structure of a farm shed was erected collectively near the planned railroad line. Everything happened under the eyes of the police, who were alerted late and only became aware of the protest after an hour of action. 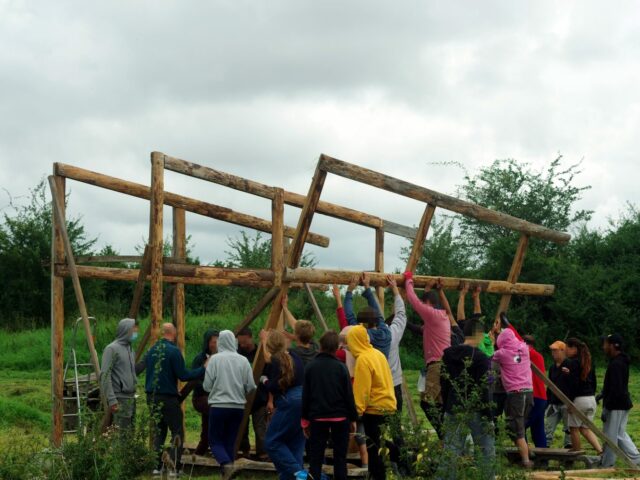 During the day of action four processions, the fifth remaining at the camp, set out around the town of Gondrecourt-le-Château. The cops concentrated mainly on the « golden finger » and the blue « circus finger », which gathered at the official meeting point in Horville, south of Gondrecourt, the « purple » and « green » fingers were able to gather in the village of Abainville, further north, without being worried. In Horville, the prefecture had taken the precaution of removing all the decorative stones from the roadside.
After the two processions from Abainville, each composed of about 200 anti-nuclear activists in painter’s suits, set off, the cops stopped the « purple finger » at the entrance to Gondrecourt. During this march, a comrade accompanying a person in a wheelchair was attacked and the policemen hit her on the head without any reason. Later, the purple march managed to cross the outskirts of the town to the ANDRA logistics depot, where it was again stopped by tear gas.
Meanwhile, the « green finger » was able to march south along the railway line in bright sunshine and with the smallest police escort imaginable. While one group blocked the cops from advancing by erecting barricades, a few dozen activists set about dismantling and bending sections of the railroad tracks. With smoke bombs and umbrellas, they were protected from the gaze of the gendarmerie helicopter and a reconnaissance plane of the authorities. After a good hour, the demonstration moved under the slogan « ANDRA dégage – Vive le bricolage (ANDRA get out – Long live handiwork) » to reach the surroundings of the « purple finger ».

Meanwhile, the « golden finger » managed to reach the ANDRA depot from the south and damaged the fence and the facade. During their retreat, the only arrest of the action weekend took place. 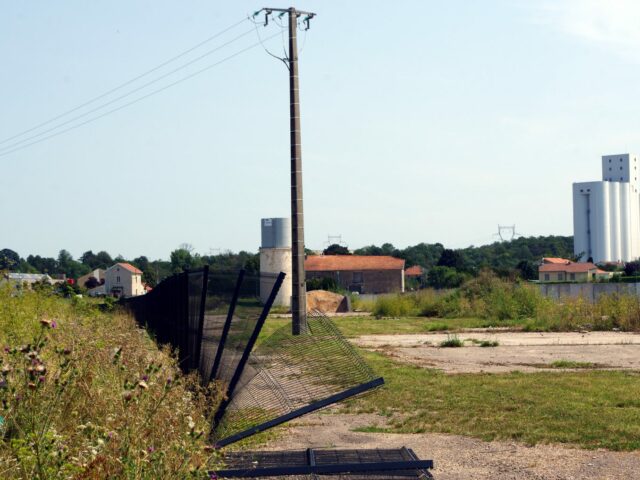 While the « purple » group was arrested for the second time at the entrance to Gondrecourt, the « green procession » moved resolutely towards the north side of the ANDRA depot. In the blink of an eye, the fence came down and over a hundred activists stormed the site. While they were taking their anger out on the facade with fire extinguishers and prepared paint cans, the opponents destroyed most of the windows of the building. The interior of the building was also ransacked and a company car was smashed and turned over 180 degrees. After only ten minutes, the protesters had disappeared from the site again – the following squadron arrived too late to intervene. The solidarity of the « stress-free » blue finger, which danced happily to the rhythm of the samba and the jingling of the windows at the intersection, facilitated the retreat and created a nice connivance. 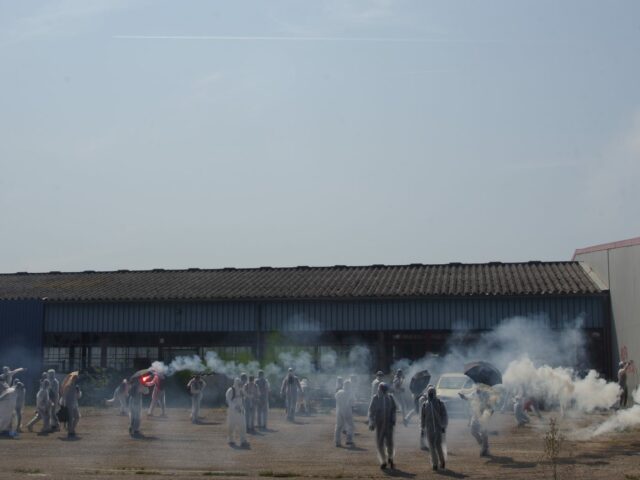 The retreat of the green and purple processions, now united, was somewhat delayed. Slight scuffles between demonstrators and cops, in the form of firing of pyrotechnics, stones and tear gas, took place in the early afternoon. After a lull, during which evidence was handed over to the flames, the activists moved along the railway line back to Abainville. The « golden » and « circus » processions had already begun the long march back to the camp.

From Abainville, the situation became tense one last time: barricades prevented the cops from advancing and the demonstrators had to defend themselves again against the use of tear gas. Near the center of the village, stones flew towards the gendarmerie – even the proud P4 jeep was damaged. Thanks to spontaneously improvised shuttles, the activists were supplied with water and a long line of cars allowed their retreat. 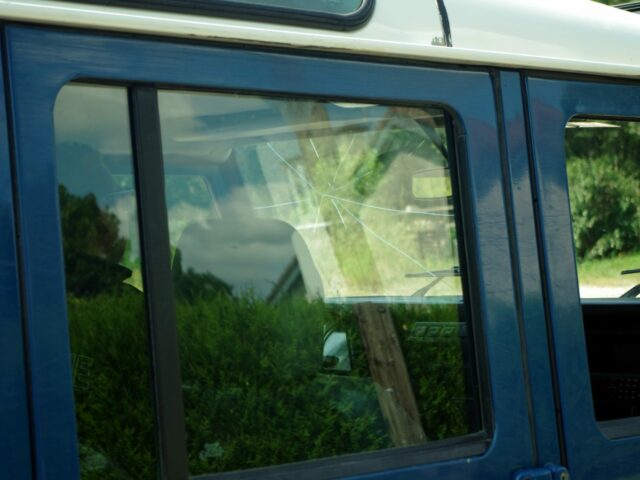 During these successful days of action, ANDRA and its CIGEO nuclear waste management project were once again the subject of massive opposition. There were few injuries and only one arrest. At a summary trial at the Bar-le-Duc court on Monday, the person concerned was sentenced to a ban from the Meuse after almost 48 hours of custody. In September, the person will be charged in a trial for damage to property and refusal to give identification details. The presence of the cops was much less than feared, so there were far fewer confrontations than usual. Solidarity and courage, as well as a decentralized marching strategy, new to France, worked and outnumbered the surprisingly few cops. Once again, a clear signal was sent against the project and, in addition to many substantive events, a lot of anger was able to come to light. ANDRA is requesting recognition of the public utility (DUP) of its project and wants to go ahead with the requests for expropriation and construction. On September 15, the « public participation » hearings on the DUP will begin in Montiers-sur-Saulx. It’s time to turn up the pressure! 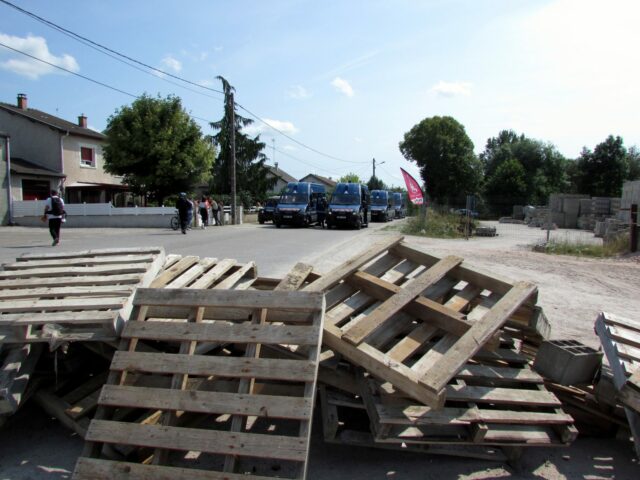 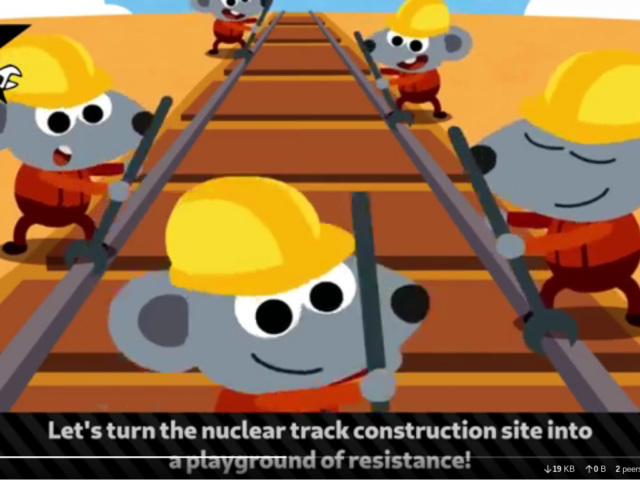 Article published on Attaque. In Bure (France), the State wants to build a center for burrying nuclear waste. In September 2021, the public hearing to determine the public utility (DUP) of the CIGÉ...   Lire la suite 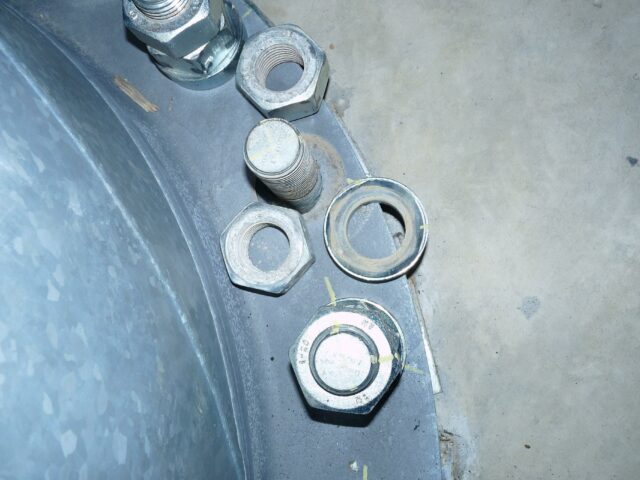 French article initially found on Indymedia Lille.   Owls from here or elsewhere, we swung into the dark night. We followed the tracks of the fox and the roedeer, smelled the early autumn air,...   Lire la suite