Note : the up-to-date version of the program is available on the website of the Anarchist Bure Cross.

The anti-prison week is in less than a month! It will happen from 2 to 8 march 2020 in the old train station of Luméville, close to Bure, place of a struggle against a project of a center for burrying nuclear waste.

The idea is to take time to meet, between people and groups from different countries, have formal and informal times of discussions, workshops, movie screenings, readings. You can come to the week with your own proposals, with or without telling us in advance. Zine distros are also very welcome.

We received criticisms regarding the lack of topics related to racism in prison and state racism in the program of the week, considering the key role that racism play in penitentiary systems. We would like to make more space for these topics, so if you think you have something to contribute on these topics, please contact us.

This section will be regularly updated and completed between now and the beginning of the week.

An update on the struggle in Bure

The Cigéo project, the events of the last few years.

In the early 1970s, revolts followed one another in french prisons. This film recounts the revolts of 1971-1972 in the prisons of Toul and Nancy (not far from Bure), interviewing two prisoners who took part in the riots, as well as a screw. These prisoner riots will raise the problems of the conditions of detention, the function of the prison and the french prison system.

In french, with english and italian subtitles.

Discussion: investigations for criminal associations in France and Italy

Loïc was released – under conditions – in last december after 1 year and 4 months in prison in Hamburg. We will talk about the conditions of his detention and the repressive methods used by german cops – along with other european police forces – to identify, track down and arrest people suspected of taking part in the riots against the G20 in july 2017.

On the case that specifically concerns our friend, we will give an update on his lengthy trial, which has been under way for a year and a half now and which should be concluded in the coming months.

With people from Loïc’s support group.

Claudio Lavazza is an anarchist who participated in numerous armed attacks and expropriations, before being arrested in 1996 in Spain after 16 years on the run. In this interview, he talks about his life in prison and the possibilities for struggle inside and outside prisons.

In italian, with french and english subtitles.

People who have spent many years in isolation in different prisons in Europe talk about results of the isolation system and its influence on human life. Between the interviews are scenes filmed in a women’s prison in the United States, as well as fictional scenes.

Disclaimer: this film deals with difficult subjects, the psychological impacts of extreme solitude and suicides in prison.

In several languages, with spanish, french, english and italian subtitles.

Collective reading of the book « Milot l’incorrigible » – off topic

Was it ever funny? Actually, yes – between 2005 and 2007, when the Law and Justice party first entered a coalition with two other right-wing parties, their changes in the state were often limited to stupid school uniforms. Many people could not believe their victory and did not take this government seriously. However, Law and Justice returned to power in 2015 and took over the entire pool. Since then, the party has introduced more and more complicated changes in the law, which make it possible to say that Poland is no longer a ‘democratic’ country. During the presentation we will talk about these changes and about the repressions and scale of surveillance against activists and anarchists.

In this interview, S. recounts his experience in prison, his emotional ties, whether they are friendly, sexual or romantic…

Warning: this audio listening talks about difficult topics, sexuality and trauma such as rape.

In french, with live translation in english and italian.

A parodic comedy about « raid and rescue » operations against prostitution in Thailand (Siam is the old name of Thailand). Written, directed, and acted by thai sex workers.

Fiction about a radical trans/queer struggle against the prison industrial complex and towards a world without walls.

In english, with english, french, italian and german subtitles.

Friday: about being « on the run »

Saturday: anarchist views on justice, law, crime / how to get out of a punitive system

Discussion on alternatives to the penal system, by the Anarchist Black Cross – Paris/IDF

Writing workshop for prisoners, by the Anarchist Black Cross – Paris/IDF

The diversity of writing and correspondence practices is valued: letters, postcards, individual but also collective writing, drawing, etc. We make available addresses of prisoners, material, documentation to help us, inspire us, and make us aware together of the stakes, constraints and possibilities.

The goal of the workshop is to empower individuals in defining threat models and implementing reliable security policies. While we present some free software, our approach is « practice-centered » (questioning and improving our digital practices based on a better understanding of how computers and the Internet work). Our approach also encourages limiting the use of digital tools.

And also during the week…

Documentation and discussion: state ableism and its relationship with justice and prison

Audio listening : revolt in a prison in Avignon, France, in 1974

Testimony of a person who took part in a revolt in the prison of Avignon in 1974.

Reading of a letter from Alfredo Cospito

Alfredo Cospito has been imprisoned in Italy since 2012, following an attack on Roberto Adinolfi, CEO of Ansaldo Nucleare (the company in charge of the italian nuclear industry). He was also sentenced to 20 years in prison last april as part of the repressive operation « Scripta Manent ». We will read a letter sent by Alfredo as a contribution to the anti-prison week.

Reading of a letter from Andreas Krebs

Andreas Krebs has been imprisoned in Italy since 2018. He was sentenced to 24 years in prison for the murder of his former boss, and for his proximity to the RAF (Red Army Faction). We will read a letter from Andreas.

Space for writing to prisoners, throughout the week, by the Anarchist Black Cross – Paris/IDF

Writing is an accessible way to break prison isolation, to show that, outside, we are in solidarity. This space will be dedicated to quick and collective writing on posters and postcards. We will make available addresses of people undergoing particularly hard conditions of detention (isolation, etc.), writing materials, and documentation (including our Guide to writing to prisoners).

Coming to the place of the event

There will be vegan food from sunday 1st in the evening to monday 9th in the morning. We will provide the food and cooking equipment but cooking will be participatory and rely on self-organization. You will be able to put money in a free price box to help us cover the expenses of the week.

If you need sleeping places in the building on the place of the event, please tell us in advance how many places you need so we can organize.

Translations will be provided as much as possible in french, english, german and italian. If you plan to come to the week and are able and motivated to do translations during discussions, you can tell us in advance when you would come and from which to which language you can translate.

We published an article about legal information and police controls in the context of the week. You can read it here.

See you in march! 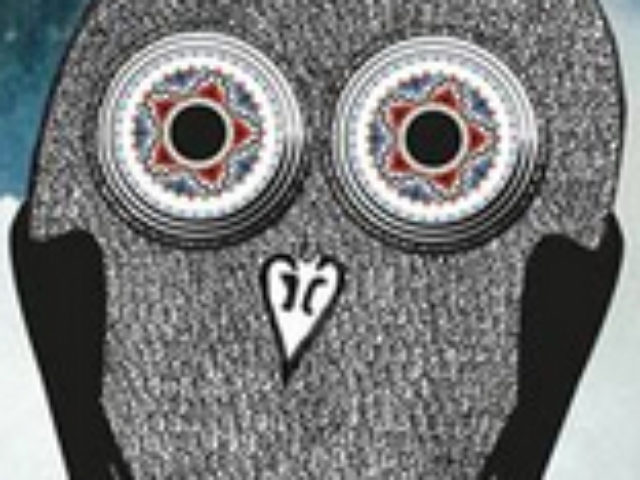 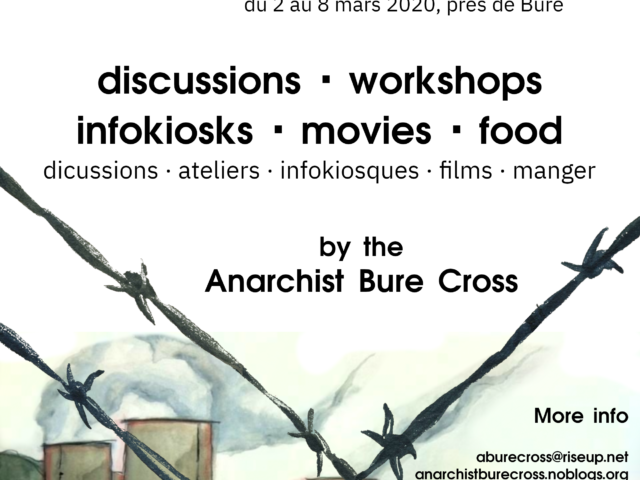 Note : the up-to-date version of the program is available on the website of the Anarchist Bure Cross. The anti-prison week is in less than a month! It will happen from 2 to 8 march 2020 in the old ...   Lire la suite